How Can You Tell Your Pet is Overweight?

Most pets these days are overweight, even if many of their owners are in denial about it. Wondering how to tell if you pet is overweight?

“I don’t think pet owners truly appreciate how important it is to have their pet at a healthy weight,” says Ashley Gallagher, DVM, a veterinarian at Friendship Hospital for Animals in Washington, DC. “I think people don’t believe me or think I’m exaggerating when I tell them an animal’s obese.”

But pet owners should listen, since being overweight puts your dog or cat at risk of many diseases, not least of them diabetes, cardiovascular disease and arthritis.

And while your vet may diagnose an overweight or obese pet, it’s easy to determine for yourself, too.

The best way to determine whether a pet is obese is by using a system such as the body condition score, says Dr. Jim Dobies, a veterinarian with South Point Pet Hospital in Charlotte, N.C., and a member of the North Carolina Veterinary Medical Association.

Body condition scores can be easily found online, where there are pictures of what your pet looks like and what his ideal body looks like. Most websites give scores of one to five or one to 10, and your pet’s physique should resemble a picture of an animal in the middle numbers.

But you can also assess your pet without them, Dr. Dobies says.

The best way is to stand above pets and look down on them. “You should be able to feel their ribs but not see them. If you can see them, they are too skinny,” Dr. Dobies explains. “If you can’t see their ribs, and place your hands on the side of their chest and still can’t, they’re overweight.”

Both dogs and cats should also have a nice taper at their waist (between the abdomen and where the hips go into the socket), he says. “If there is very little or none at all, they are too heavy and they’ll be oval shaped. They’ll be egg shaped rather than hourglass.”

And a very obese pet, he says, “will have a pendulous abdomen, hip fat, and neck fat, all of which are very noticeable.” But pets don’t usually reach this point of obesity until they’re aged at least seven, he adds.

There’s another way to tell if your pet is overweight, and that’s by using the new, science based Healthy Weight Protocol, which was created by Hill’s Pet Nutrition in conjunction with veterinary nutritionists at the University of Tennessee.

This tool is “brilliant,” says Hughes, who likes it because it’s objective.

How does the protocol work? A vet takes measurements — four for a dog and six for a cat — then inputs them into a computer. The computer then determines the animal’s body fat index. By comparing this with a chart, the vet can tell you exactly how much weight your pet needs to lose if it is overweight.

“It’s much more specific and scientific than me saying a pet looks like he should lose two to five pounds,” Hughes says. “With this, we can determine exactly how many pounds pets should lose and how many calories they need per day.”

If you’re going it alone with your pet’s weight loss — and Dr. Dobies does recommend that pets have a physical with their vet every six months — you can weigh your pet on a scale, if they are small enough, he says, and monitor the weight over time.

If a dog or cat is overweight, cut their food intake by 25 percent, Dr. Dobies advises, and increase their exercise level gradually day by day.

“Don’t leave it up to the dog,” he says, “but make sure he gets out on the leash. Gradually you want to build up to a 30-minute walk, twice a day.”

It’s harder to force cats to exercise, he adds, so play with them more if you can, with kitty toys or a laser pointer, for example. But also recognize that cats are at their most active when the sun is rising and setting, so if you can play with them during these hours, you’ll be most effective.

Dr. Dobies also cautions against letting your kitty lose weight too fast. Rapid weight loss can lead to fatty liver syndrome (hepatic lipidosis), which can cause her to go into liver failure.

Having your pet exercise may also mean you don’t have to reduce his food as significantly, especially as his endurance builds up — and maybe soon you’ll have an hourglass figure, too.

Call for an appointment. Sorry, no walk-ins 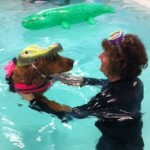 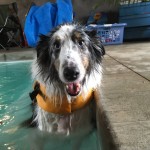